In June, Jim and I visited our 46th and 47th states, Utah and Idaho. The #1 item on my bucket list is visiting all 50 states, and as of this summer, only Nevada, Oregon, and Hawaii are left. While in Utah, we visited Antelope Island State Park on the Great Salt Lake. It is an incredible place! 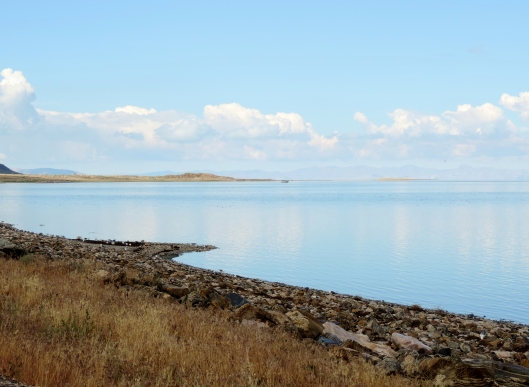 Looking over the Great Salt Lake from one of the hiking trails in the park.

The Great Salt Lake is a terminal lake. That means that it has no outlet. When its tributaries, the Bear, the Jordan, the Ogden and the Weber Rivers empty into it, they bring in not only fresh water, but also minerals, sand and  rock particles. As the minerals, such as salt, dissolve they have no place to go. The only outlet for the lake is evaporation, and as the water evaporates it leaves behind the dissolved minerals.

The Great Salt Lake has eight islands, of which Antelope Island is the largest. It is fifteen miles long and five miles wide, with forty natural springs which provide fresh water for people and wildlife on the island. The island became a state park in 1981, when the state of Utah purchased its 28,000 acres.

The park entrance is at the beginning of the causeway which takes you out to the island. There you will pay a $10.00 fee for a day pass. After leaving the kiosk and venturing out across the causeway, you will be in a wonderland of nature well away from the busyness of the mainland, and certainly worth more than the entrance fee! 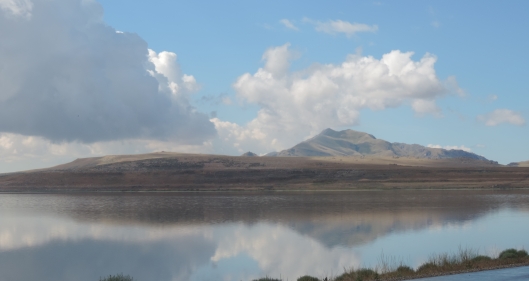 Approaching Antelope Island on the causeway.

One of the first things you notice as you drive the causeway is the large number of birds near and in the water. The birds that are here are feeding on the brine shrimp which thrive on the algae and bacteria that grow in the lake.

We saw literally hundreds of seagulls as we drove across the causeway.

Catching this shot of an American Avocet is one of my favorite pictures of our trip.

While in the park we hiked one of the trails. Here are some of the things we saw as we climbed to the top of Buffalo Point Trail. 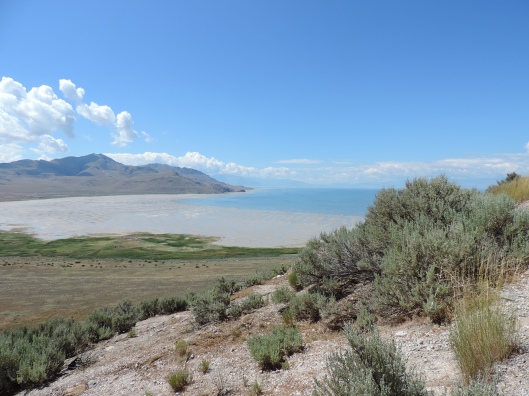 Shadscale grows throughout the park as seen here on the trail.

This Chukar Partridge was a real treat, letting us walk right up to him.

We drove the road that goes through the island.

You can see the Wasatch Range from the island, across the great Salt Lake. It was beautiful after having snowed the night before…June 17!

This buffalo was relaxing right next to a campground. There were actually buffalo in the campground! 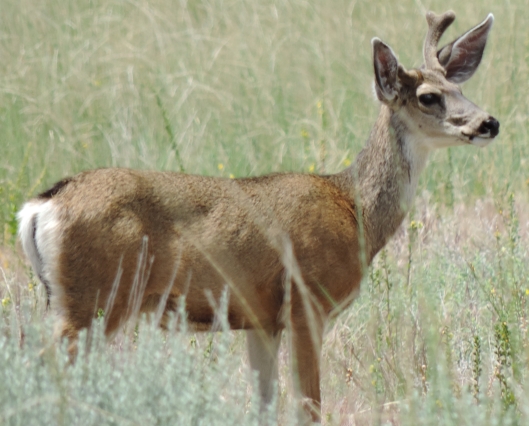 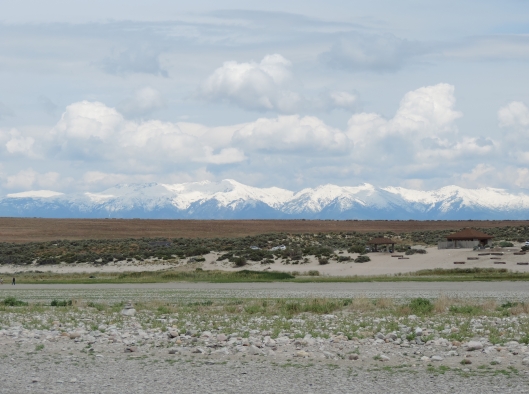 Of course I had to walk into the water. This picture was taken looking across the island from the vantage point of the lake.

What a beautiful day, what a wonderful time! Whenever, and wherever we travel, I enjoy eating the dishes unique to that area and picking up cookbooks based on the traditional cuisine of the area. So, before leaving for Utah, I did some research. I discovered that when in Utah you must have a raspberry milkshake…did that and it was oh, so good!

Utah is apparently also well known for its Dutch oven cooking. My goal was to find a cookbook for this particular cuisine and try out some wonderful dishes in my big, red Dutch oven at home. While in a grocery store in Park City one afternoon, I found just such a cookbook, a thin book of only Dutch oven recipes, so of course I picked it up. Imagine my surprise when I discovered the Utah idea of Dutch oven cooking was in a big cast iron pot, over a fire, with hot coals on top and on the bottom. My next stop was to go back to my research on the internet. Surely someone has created a conversion chart for making these delicious recipes without a campfire! And , of course, someone has.

Blessed with an incredible number of zucchini from our garden, so far we have had 50, I was so happy to find a recipe for a zucchini bread in my new cookbook. It is made over a campfire in a cast iron frying pan. I just so happen to have my grandmother’s cast iron pan from the 1940’s, so I got out my conversion chart and gave it a try. The pineapple gave it a new twist and the bread was delicious. I also made it using two 9″x 4″ bread pans. This worked even better for us, since we could eat one right away and put one in the freezer for later. I found the bread in the pans did not brown quite as much, and was a little more moist.

Mix the eggs and oil in a large bowl. Add the sugar and vanilla, then add the zucchini. Add all the other ingredients and mix well. Pour into a greased cast iron frying pan and bake at 350 degrees for about 45 minutes to an hour. The time it takes for the bread to bake will depend on the size of your cast iron pan. Mine took a little more than an hour.

You can also bake this recipe in two 9″x 4″ bread pans. Bake at 350 degrees for 45 minutes to an hour, or when a toothpick inserted in the center of the bread comes out clean. Start checking the bread at 45 minutes to ensure it will not get overdone and dry. 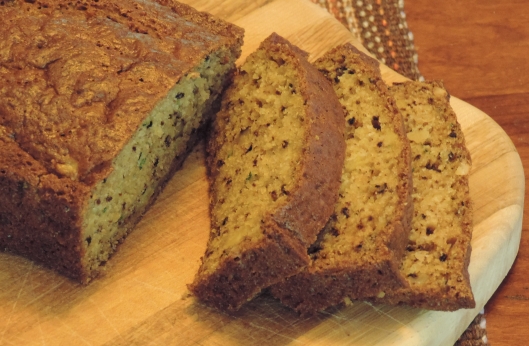 I also baked this recipe in two 9″x 4″ bread pans.

This recipe was adapted from American West Dutch Oven Cooking. It was published in 2000 by Great Mountain West Supply in Salt Lake City, Utah.