A couple activities came together nicely for me this week…

The first happened around our apple tree… 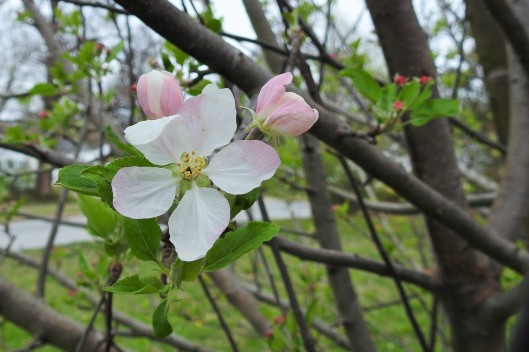 Many years ago, one of our sons gave us an apple tree, something we had wanted for a very long time. I am not exaggerating when I say many years ago, for it has to be at least fifteen. For the first ten years we had never once seen an apple on that tree. It blossomed beautifully each and every year, but produced no apples. Then we learned it takes two apple trees to produce apples, so we purchased another tree of a different variety of apple. And we waited…and waited…

Until three year ago when, finally we found apples developing on the original tree. We were so excited, and could hardly wait to eat the very first apples from our own backyard.

We left on vacation, and when we returned, every single one of those apples was gone…seriously, every single one. I blamed raccoons, squirrels, opossums, deer (remember, I live in the city), and even wondered if there were not some hungry teenagers lurking around in the dark enjoying our anticipated harvest while we were away. For two more years, we had the same result…even if we did not go out of town.

Then, this year, the trees blossomed, apples appeared… 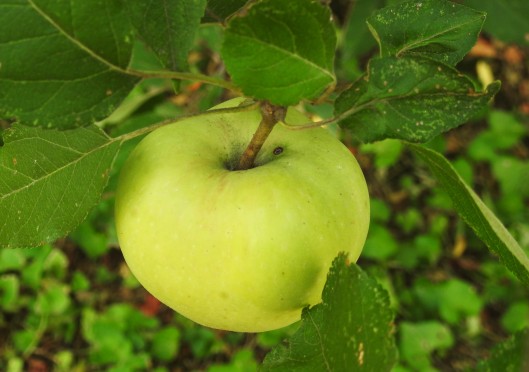 and apples remained. I wanted so badly to pick those apples, but I waited. Finally, I went out and picked apples. I was willing to share…I brought some into the house, and left a large number, particularly those high up in the tree that I could not reach, for any creatures that had enjoyed our apples in the past.

The apples were not the most beautiful, but they were ours, and they were absolutely delicious…

Now on to the second part of my story. Every couple of years, I get the urge to go through every item we own. I am supposed to be down-sizing when I do this, not sure how successful I am at that aspect of my sorting.

As I was going through all the cookbooks I have purchased at different historical sites across the country and abroad, I came across a small book I purchased at one of the sites. It brought back so many memories of trips we have taken with our children and our grandchildren.

A spread of food items at Colonial Williamsburg. You can see our granddaughter eyeing them, wishing she might just have some.

Ladies enjoying tea in the garden as they discuss the events of the day.

The recipe calls for three pippins, so I did some research…

The Algonquin Indians introduced apples to European colonists living in Quebec. We are not sure about the variety of those first apples. A pippin is a variety of apple that was cultivated in the American colonies, and still is today. It is apparently not the best eating apple, but makes very good apple cider.

The recipe for Apple Tansey is written in paragraph form, so I have tried to put it in some kind of acceptable recipe format. I also determined some of the measurements myself, since some of the items were not written with regard to amount.

It was delicious! Though meant to be a dessert after a family meal in colonial times, it made a great breakfast for us…especially after we drizzled it with some authentic Vermont maple syrup… 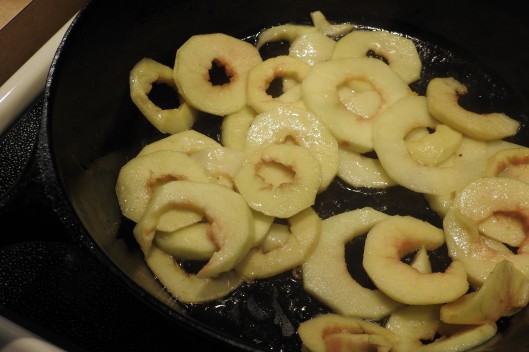 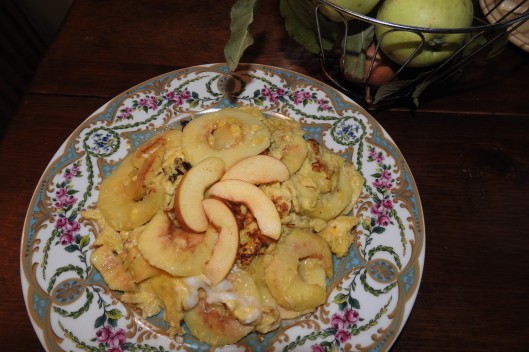 Not the prettiest presentation, but I put it on a fancy heritage plate…and Jim was dutifully impressed!

All in all it was a great week…getting our own apples, sorting through the moments of our lives, enjoying an old fashioned dessert on an old fashioned plate, in our almost one hundred year old house. Life can be so much fun sometimes!

This recipe is adapted from “Colonial Food”, by Ann Chandonnet. It was published in 2013 by Shire Publications in Great Britain.