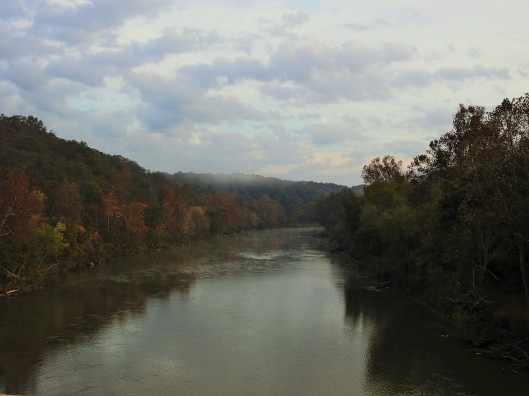 Traveling north on US 63 as the fog lifts off the Gasconade River.

—my husband, Jim, and I started out for Independence, and the home of our 33rd President, Harry S. Truman, and his wife, Bess. It was a beautiful drive across the center of the state, through farmland and small towns.

We were on our way to visit the last of our Missouri National Park sites as listed on the NPS website.  As our nation celebrates the 100th anniversary of our National Park Service, we decided to find our national parks…in our own backyard, our own state. What an experience it has been. We have learned so much, had so much fun, and have come away from our journeys with so much more appreciation of our nation, its natural places, its history, and its impact here and on the entire world.

When we arrived in Independence, we stopped for lunch at Cafe Verona on the city square. The grate on the front windows was very intriguing, adorned with dozens of locks. I took a picture of them and posted them to my Facebook page. I was surprised when a friend commented that there is actually a tradition to locks on bars and fences. The lock is put on by loving couples to signify that their love is for no other, and will never end. 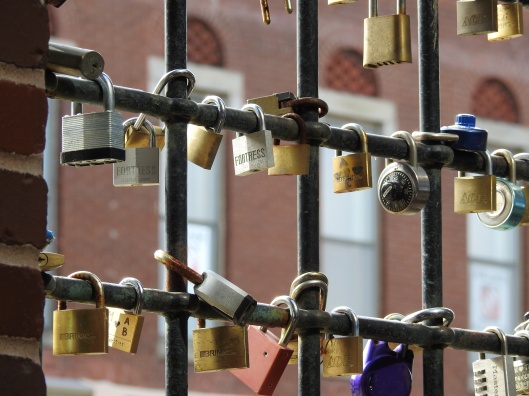 Tokens of love on the window gates at Cafe Verona in Indepependence, MO. 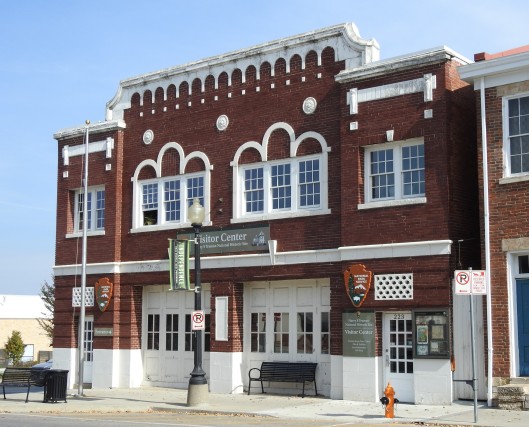 Our next stop was the Harry S. Truman National Historic Site Visitor Center. The Visitor Center is located at 223 N. Main St. There we viewed a film on Truman’s life in Independence and picked up our tickets to tour the house itself. 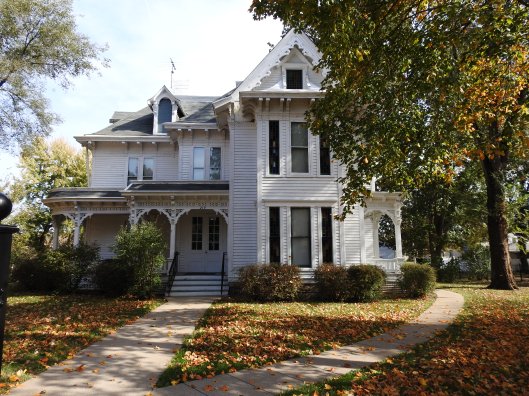 The Truman home is at 219 N. Delaware St. My first impression as we drove up to the curb in front of the house was how much the area reminded me of the Midwestern neighborhood in Michigan in which I grew up, and how much it reminded me of the Midwestern neighborhood in which we raised our own five children. The house looked, and felt warm and inviting, like a place where a family really lives.

Though Harry Truman and Bess Wallace had been acquainted since childhood, it was on a day in 1910, when Harry returned a cake plate from his cousins, who lived across the street from the Wallaces, to Bess’s mother that he fell head over heels in love. After a courtship of nine years, they were married on June 28, 1919, and moved into her family’s home.

While living in the Wallace house in Independence, which became the Truman home after the death of Bess’s mother, Harry Truman opened and lost a men’s clothing store, was elected to two judgeships in Jackson County, lost one re-election bid, was elected to serve as a US senator from Missouri, and in 1944, was elected to be Franklin Roosevelt’s Vice President.  While living on N. Delaware, Harry and Bess also welcomed a daughter, Margaret, their only child.

Less than three months after assuming the Vice Presidency, and following the death of Franklin Roosevelt, Harry Truman was sworn in as the 33rd President of the United States on April 12, 1945. It would be many years before Harry and Bess could return to their quiet, Midwestern home in Independence, MO.

But return they did, to the place they both loved best. It was amazing to me how normal a life the former first family was able to lead, though it did have its challenges. There had always been people who wanted to see the place “where the President lives.” The biggest intrusion on their quiet life had been the installation of a security fence to keep out the sightseers, especially those who thought it was okay to walk into the garden and pick one of Bess’s prized flowers. Some had even torn boards off the house. On one occasion, Bess discovered two “visitors” walking through the house! 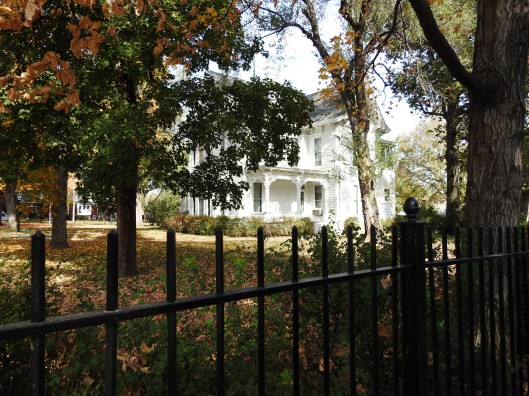 This fence was installed around the yard to keep “visitors” at a distance.

Until 1963, and the assassination of John F. Kennedy, former Presidents were not given Secret Service protection…and Harry Truman, citizen, did not like it when it did come! Secret Service agents were installed in a house across the street, which is privately owned and inhabited today. They did not come into the Truman home without an invitation, and that was rarely extended.

When you visit the Truman home today, you will see it just as it was on the last day Bess lived there. Their daughter, Margaret, helped the park service set the dining room table as her parents would have it set when the entire family was there to eat together. The same appliances, dishes, wallpaper, and furniture are just as they were. As you look into the library you will see the books each of them enjoyed. The yard has been kept as the Trumans preferred it… natural, with no fancy, formal gardens. And in the garage sits Harry’s last car, a Chrysler Newport.

Each and every day, Harry Truman took a two mile walk around Independence. You can still follow in his footsteps as you follow the signs that mark his route. You can also visit the Noland Home across the street, where Harry Truman’s cousins lived. 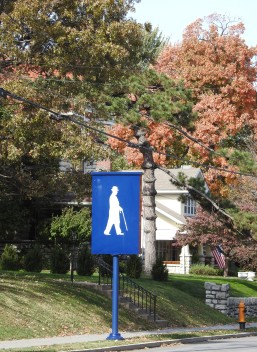 You can walk the streets of the neighborhood, just as Harry Truman did each and every day. 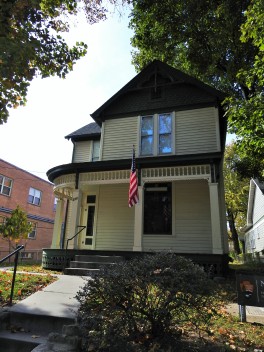 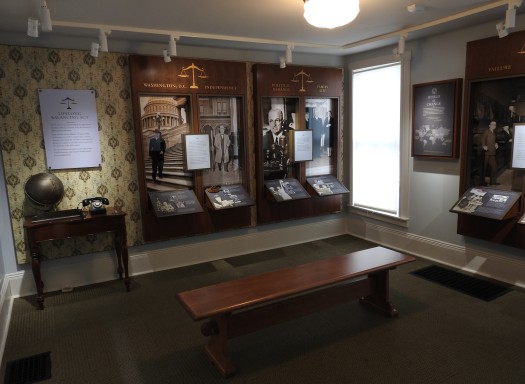 Inside the Noland House, you will find displays relating to the lives of Harry and Bess Truman, and their Midwestern roots.

A visit to the Harry S. Truman National Historic Site would not be complete, however, without a stop at the Truman Library, just a couple miles away. 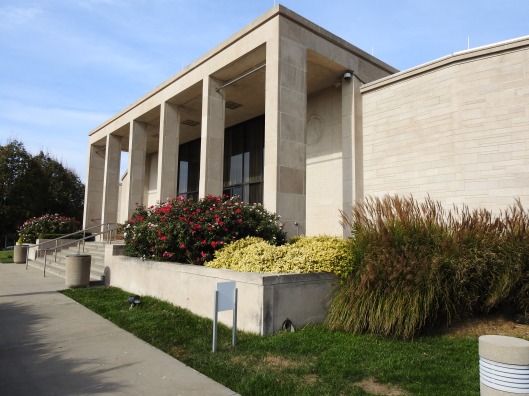 The library is a marvelous place, with displays depicting the times of the Truman Presidency. Here are a few of the memorable things you will see on a visit to the library…. 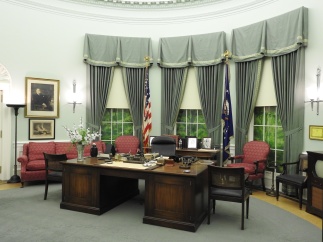 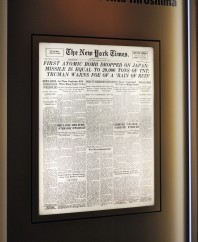 You will find an exhibit pertaining to the dropping of the atomic bomb on Japan, ordered by Harry S. Truman in an effort to bring an end to World War II…

An exhibit dedicated to post-war challenges in the United States…

Oe of the exhibits explains the challenges, and the horrors of the Cold War…

The Garden where both Harry and Bess are buried…

An eternal flame in honor of our 33rd President.

You can learn more about the Truman Home and the Truman Library by visiting their websites at:

http://www.nps.gov/hstr/index.htm for the Harry S. Truman National Historic Site, and

http://www.trumanlibrary.org/ for the Truman Library

This year spent visiting the national park sites in our own state of Missouri has been so rewarding. It has reminded us of how fortunate we are to live in this country, this place we call the United States of America. America is a homeland to cherish, even as we take stock of who we are as a people, learning from our mistakes, taking pride in our successes, and forever moving forward to create a better country, a better home for all of us, and all who want to become a part of us.

So go on, get online, find the national park sites in “your own backyard”, and then get out there and discover your America. Have a great time while you are traveling, exploring, and learning, gaining a new understanding of your backyard, your own state, that one that you call home!

It is said that when Harry felt homesick for Missouri and their house on N. Delaware Street, Bess would make him some Ozark Pudding. She would also often serve it for dessert to visitors at the White House.

I must say, it is really easy to make, but tastes like it takes a lot more time than it does. It is not like a real pudding, but rather a gooey, puddingy cake (not sure about that word, puddingy, but it fits the dish perfectly. The top is like a crusty, browned meringue. When you break into it, it falls immediately, but don’t worry, that is what it is supposed to do. Bess would have served it warm with fresh whipped cream with a bit of rum added. We ate it warmed with vanilla ice cream, and it was absolutely delicious. There was something about it that tasted very homemade and comforting. It reminded me of my childhood, eating at my Grandma’s house…love! 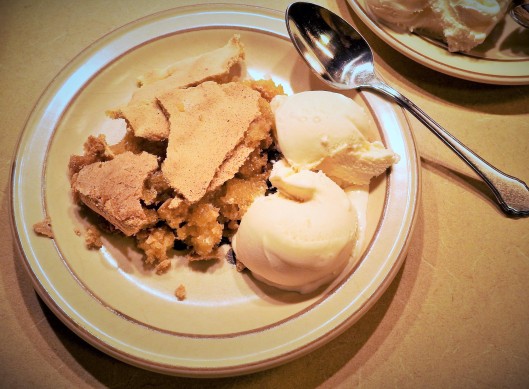 3 thoughts on “Finding Your Park in Your Own Backyard, #13…A President From the Neighborhood and Ozark Pudding”