In response to The Daily Post’s weekly photo challenge: “Muse.”

When I saw the subject for this week’s photo challenge, I knew immediately what my post would be…Riverlands Migratory Bird Sanctuary in West Alton, MO. I love the scenery, I love the wildlife, I love the river…the Mississippi River. My only problem was choosing the pictures I would use out of the hundreds I have taken in all seasons and during all kinds of weather. So here is what I settled on…

We see herons all the time at Riverlands…we like to think this one is a permanent resident. We have named him Eli, and we look for him on every trip. He is very territorial, and lives in Ellis Bay.

The scenery at Riverlands is always changing, as the seasons change and different birds come and go, and as the river changes.

In spring, the sanctuary is alive with color…

in the open fields and in the woodlands.

Right now, the Mississippi River is at flood stage, which has a huge impact on the sanctuary.

In fall and winter, everything is brown, but it is one of the best times to see the migrating birds.

In summer, the land, the river and Ellis Bay, part of the sanctuary, are vibrant with shades of blue and green.

We have seen so many different kinds of wildlife…but most impressive are the thousands of birds that migrate through the area, as well as the ones that make the sanctuary their home.

The winter is beautiful at Riverlands…saw these swans in late winter several years ago.

The herons are probably our favorites…

Eli in the spring, standing ever vigilant.

Herons are always present somewhere in the sanctuary.

Sometimes you just have to wait for a family to cross the road…to go for a swim!

And then there are so many others…

We love the huge numbers of pelicans that arrive annually…

and turtles are always out in the sun…

so many Red-winged Blackbirds…

I waited a long time to see this Cow Egrit… 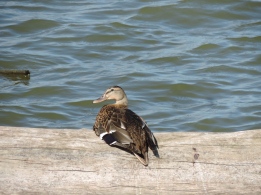 and there is no end to the ducks we see!

I told you it would not be easy to pick out a few pictures…I love this place!

As Charles Ingalls of “Little House” fame moved his family across the Midwest, setting up homesteads in Minnesota, Kansas, Iowa, and South Dakota, he, Ma, and their children were always presented with the beauty, the vastness, and the challenge of the tallgrass prairie. No matter how hard they worked, they were always mindful of the challenges of life on the prairie…the droughts, the fires, the severe storms, the locusts, and even the loneliness. But in the good years, when there was enough, but not too much rain, when the locusts stayed away, when they could get through the loneliness and the dangers of a brutal winter, when the crops were successful, there was nothing like living on the wide open Midwestern prairie. The land was fertile, the changing seasons of the tallgrass were beautiful, and living among people who were always willing to lend a hand was a truly blessed life.

When our children were young, we took them to see several of the Inglalls homesteads. After we moved to Missouri, they also had an opportunity to visit the home in which Laura lived after she moved to Missouri with her husband, Alonzo Wilder. Those places that were once open prairie have been, for the most part, turned into fields growing wheat, corn, and soybeans. We may have seen “where” the Ingalls lived, but we certainly did not see the “places” they had lived. For there is today, less than 1% of original American tallgrass prairie left.

The American prairie was created thousands of years ago. As the Rocky Mountains pushed higher into the sky they created a rain shadow on their eastern side. This made it impossible for trees to survive well in this region. As glaciers moved down over the land in the rain shadow, they flattened the area, and as the glaciers melted, they left their rich sediment behind.

Watching a storm come to the prairie is a spectacular experience.

The tallgrass prairie, those found in fourteen Midwestern states, developed because many different animals, such as deer, bison, and elk had used the land for grazing long before any white man arrived. The Native Americans were also burning the prairie at regular intervals to aid the prairie in revitalizing itself. Tallgrass prairie is dependent on fire to clear out dead plant matter, as well as to kill off any trees that might have germinated.

Plants that grow on the prairie are unlike any other. The grasses are called sedges, and the flowering plants are called forbs. Many of these plants, especially the grasses, have root systems that can go down as far as fifteen feet below the surface of the land. Up to 75% of the biomass of these plants is underground. So when fire clears off the prairie, these grasses can reach way down to find their source of regeneration. The roots not only help the plants to regenerate, but their bulk helps stabilize the land and guard against erosion. Without fire, the prairie would disappear because the surviving trees would shade them, as well as crowd them out.

There is a concerted effort in the Midwest to save the limited amount of virgin prairie still remaining, as well as restoring other pieces of land to their prairie beginnings. In Missouri, this task has been taken on by the Missouri Prairie Foundation. Its mission is to obtain and preserve as much original prairie as possible, as well as work to restore other parcels of land to prairie. A few weeks ago, my husband and I attended the dedication of Linden Prairie in southwestern Missouri, an unplowed piece of original prairie owned by MPF. It is a beautiful place…I commented that I thought I knew what the prairie looked like, but after seeing Linden, I understood I had been wrong.

Tallgrass prairies are an important ecosystem in the Midwest. I am thankful that groups like MPF are working hard to save them and I hope you take an opportunity to see a real tallgrass prairie…then you, too, will want them to be preserved. You can find out more about the Missouri Prairie Foundation and their work by visiting their website at

Other places you might want to visit to experience the prairie up close and personal are:

and Prairie State Park in Missouri,

And now a recipe that would have made Pa very happy after working on the prairie all day…no matter what the job had been, 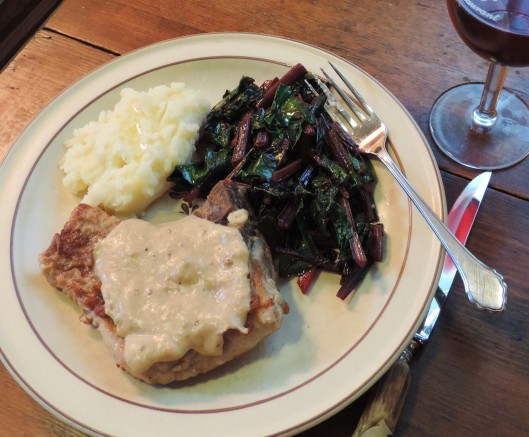 Mix together, in a shallow dish, the flour, salt, pepper and Cajun seasoning. Dredge the chops in the flour and save the unused flour.

Heat the oil in a large skillet and heat to medium-high. Brown the chops on both sides and add 1/4 cup of water. Cover and cook over lo heat for 30 minutes or until pork chops register 145 degrees on a meat thermometer. Remove the cover and crisp the pork chops. Remove chops to a paper lined plate to drain.

Make sure you have 3 tablespoons of oil remaining in the pan; add some if you need to. Scrape up the little crispy bits of flour in the pan, they make the gravy extra good.

Add 3 to 4 Tbsp. of the reserved flour to the hot oil, and stir constantly until lightly browned. Add 2 cups of milk all at once and continue stirring until the gravy is thick and bubbly. If you think the gravy is too thick, you can add a bit of water. Season the gravy with salt and pepper to taste.

Serve the pork chops smothered in the gravy. We also love sauteed beet greens with these pork chops, and mashed potatoes go good with everything!

The recipe above was adapted from one I found at food.com. The Cajun seasoning was my addition to the original recipe. I am not sure Ma would have had this ingredient in her cupboard, but it gives the pork chops a nice extra kick!

In 2010, Jim and I spent several days in one of the most charming villages imaginable, Tadoussac, Quebec. It was part of a bucket list trip for me. We spent most of our working years as teachers. As soon as we retired, I wanted to see Vermont in the brilliance of its fall color. From our stay in Vermont, we traveled into Quebec and drove along the St. Lawrence Seaway until we reached this tiny village on a fjord in Quebec. We found even more stunning color, and this rainbow completed the experience. It is my contribution to the Roy G. Biv challenge.

Here is my favorite view of Tadoussac. Quebec…

In response to The Daily Post’s weekly photo challenge: “Off-Season.” 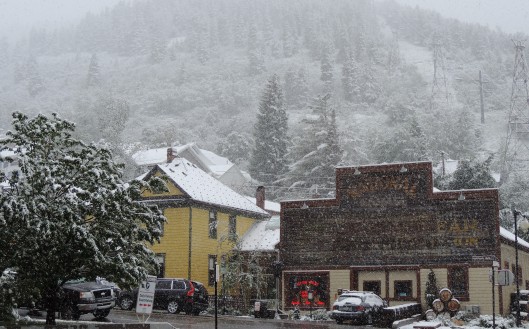 In June of 2014 we visited Utah. We stayed in Park City, a bustling ski town in the winter months, a quieter, more peaceful, village in the summertime. And then one morning we woke to this…snow, in the middle of June! Unseasonable weather in the off-season. We loved it…it was beautiful and it did not last long.

The view outside our window

…and in the parking lot.

After a late breakfast, the snow stopped, the sky was a brilliant blue, the sun was shining brightly, and we went for a walk…so beautiful!

In response to The Daily Post’s weekly photo challenge: “Vivid.” 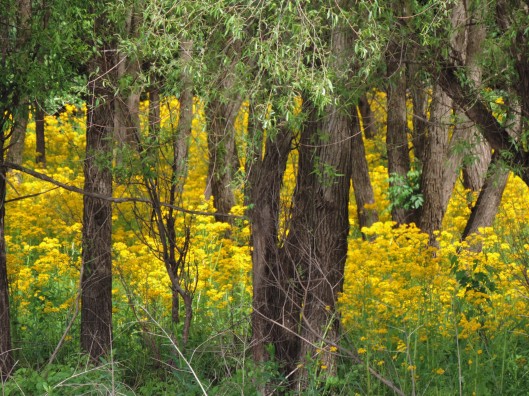 This picture was taken in the woodlands that are scattered through the wetlands near the confluences of the Mississippi, the Illinois, and the Missouri Rivers…one of our favorite places to go exploring nature.