The weatherman had been talking about it all week…the area’s first snow would fall over the weekend. Having been born and raised in Michigan, I love snow. I was pretty excited about measurable snow falling this early in south central Missouri, so I anxiously awaited seeing this first snow of the season.

But I had also wanted to spend the weekend working with my camera and natural sunlight. Snow and sunlight do not usually go together, at the same time, on the same day! So I worked with what I was given…I saw the sunrise on Saturday morning, and recorded, with my camera, how the scene changed as the storm moved in. Here is what I found…

The sunrise on Saturday was beautiful and brilliant. I loved the way the colors reflected off the water in the lake at the park.

I also liked the way the colors of the sunrise gave a warm glow to the water.

But when i returned later in the day, the sun was gone and the snow clouds were beginning to move in. 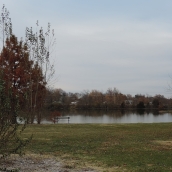 This morning, when I went to the park, there was no brilliant sunrise. But the dark night was gone and I was surprised and thrilled to see that a sun I could not see could cast beautiful reflections on the water.

And then, finally, on Sunday afternoon, the snow began to fall… 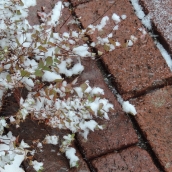 …a beautiful wet snow, that clung to everything it touched.

I returned to the park…it was a beautiful white wonderland. I loved the way the fog lay low on the water.

The geese were all out of the water, experiencing this first snow just as I was,,,by walking around in it! 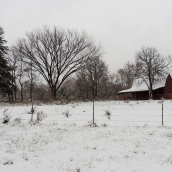 After leaving the park, I went for a ride. I found this barn outside of town. How pretty snow is…how silent and how very special.

No, it was not the way I had planned it, but what a beautiful weekend it was!