There is triumph in each and every sunrise… 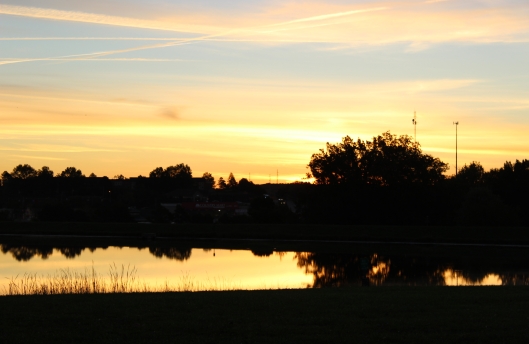 a triumph over the dark night 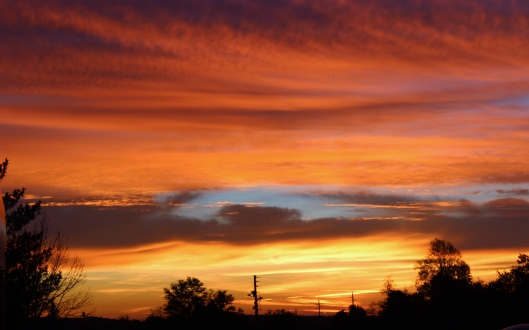 the promise of a new beginning 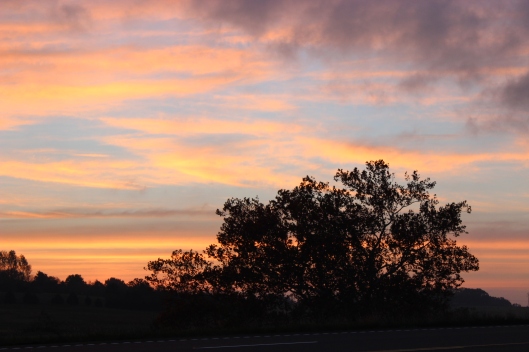 the opportunity to live more of life!

The Bob Kerrey Pedestrian Bridge spans the Missouri River, joining Omaha, Nebraska with Council Bluffs, Iowa. If I straddle the line in the middle of the bridge, I am on the edges of two states at the same time. 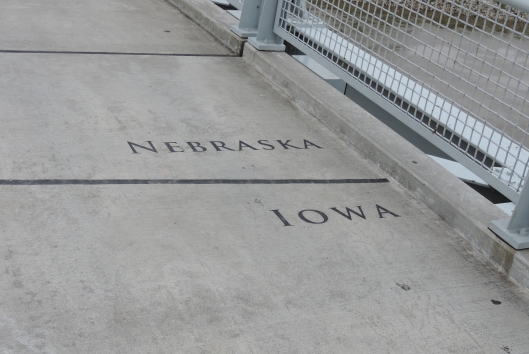 The deck of the Bob Kerrey Pedestrian Bridge across the Missouri River. 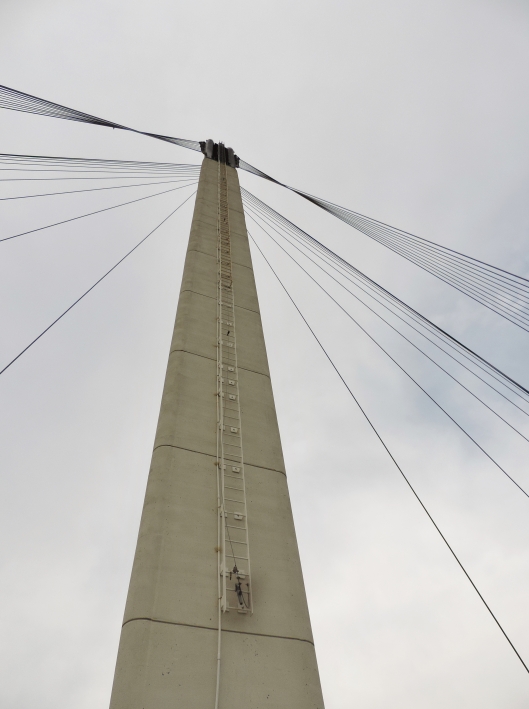 In this picture of a bridge pillar, I used the edge of the ladder to straighten the picture. It helps give extra dimension to the shot.

I love the way the blue glass casts jewels against the pure white background in this setting. 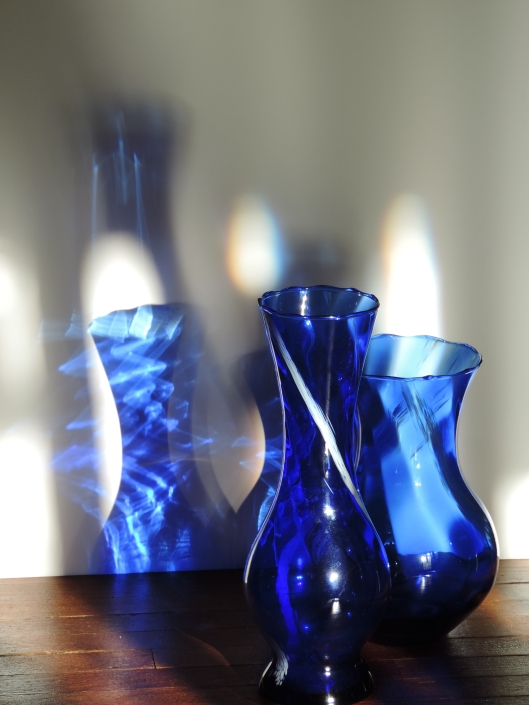 The shot I took when I zoomed in is, I think, even more dramatic. This challenge, though I was stumped at first, was a lot of fun and really made me stretch!

It is Thanksgiving time…time to reflect on all the things we have for which to be thankful. For Jim and I, it is family. Our children and their families are the most treasured gift we have, and we are so thankful they are ours.

Traveling is one of our other most treasured gifts, and because those five children chose to live in five different states, we have lots of reasons (and excuses) to be on the road… a lot. 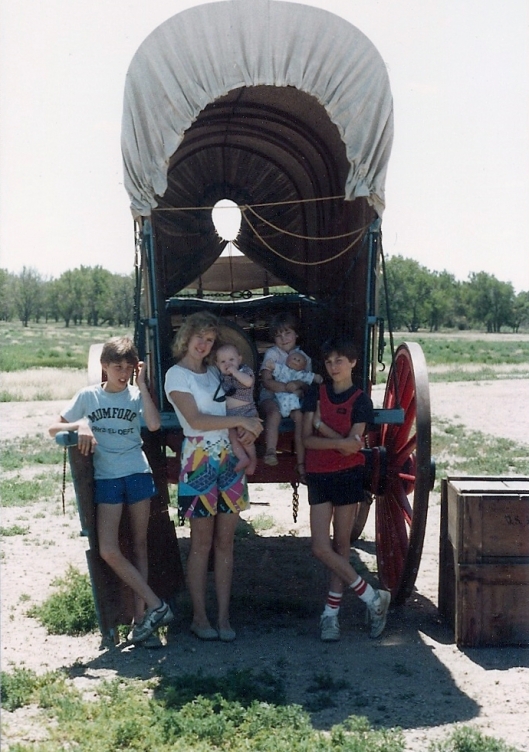 Our five children, more than twenty-five years ago, on a trip to Bent’s Fort in Colorado…and a Cabbage Patch doll, too!

So, this Thanksgiving I thought I would focus on the things for which we are grateful to the north, east, south and west, in the spring, summer, autumn and winter. Here are some of the things I came up with, though I have so many photos it was hard to choose my favorites.

To the north, east, south and west

We took a cruise to Alaska, one of the most beautiful places in the world. Here is Point Retreat Lighthouse, seen as we cruised up the Inside Passage.

We both love history, so Philadelphia is a perfect place for us to visit. This picture was taken as we strolled down Elfreth’s Alley, America’s oldest continuously inhabited street.

We have been to the Gulf of Mexico several times. We love walking along the beach.

We love to travel west to take in the magnificent Rocky Mountains. This picture was taken in Utah, as we traveled north of Salt Lake City.

It doesn’t matter what season it is, we love them all! Now that we are retired from teaching, we can take trips in autumn, winter, and spring. too! 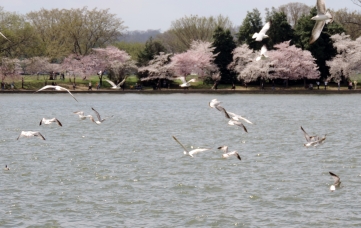 I have always wanted to see the cherry blossoms in the spring in Washington, D.C. They were truly worth the trip.

This cherry tree was close to the Native American Museum.

We are both from Michigan, and we have a son who currently lives there. We also have a daughter in Minnesota, so the ferry across Lake Michigan is an option when we want to see them both on the same trip. In this picture, we are leaving the port at Ludington, MI. 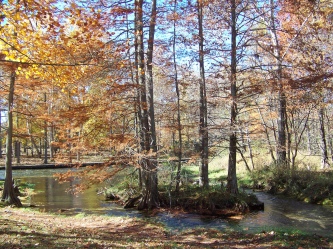 We love the colors of autumn. We have traveled to many different places to see autumn colors, but the colors at Meramec Springs, within twenty miles from our home, are some of the best in the country. 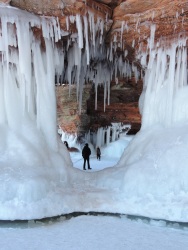 The ice caves at Apostle Islands National Lakeshore are absolutely stunning. We just happened across them by chance, and were so happy to have found them. 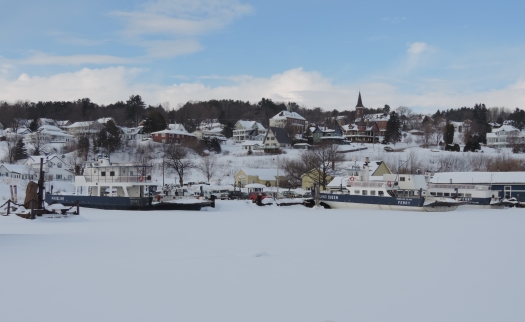 Bayfield, WI is the home of the ice caves. It was so much fun to walk out on frozen Lake Superior to take a picture of this picturesque town. Jim says it reminds him of a Currier and Ives print. He mentioned that to our kids and they had no idea what he was talking about…we are really getting old!

We discovered Pumpkin Fudge on our recent trip to visit our daughter in Arkansas. It is delicious! I knew I had to find a recipe to make some myself with the pie pumpkins we picked at the pumpkin patch near her home. This is the recipe for the fudge I made, slightly adapted from a recipe I found at https://www.verybestbaking.com/recipes/143188/spiced-pumpkin-fudge/. 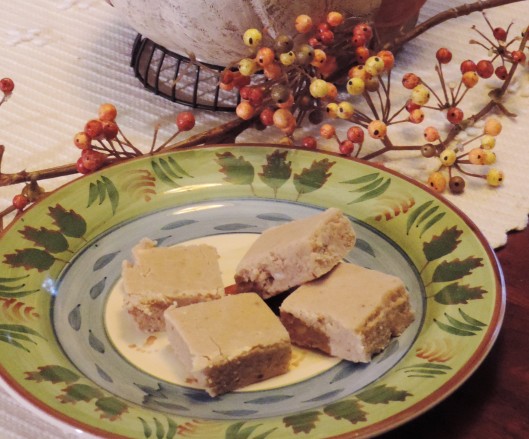 Bring the sugars, the evaporated milk, pumpkin puree’ and spice to a rolling boil in a heavy saucepan over medium heat.

Stir constantly for 10-12 minutes or until the mixture reaches the soft-ball stage on a candy thermometer (235-240 degrees F).

Stir in the white chocolate morsels, marshmallow creme’, vanilla extract, and nuts (if using). You will need to stir vigorously for two to three minutes making sure all the morsels and the marshmallow creme’ are melted.

* I use pumpkin puree’ that I have made from pie pumpkins, but you may use any commercially canned pumpkin, as well. 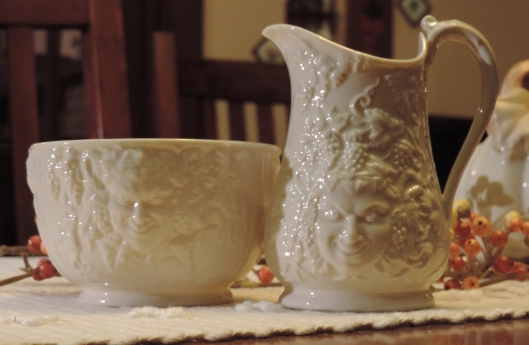 My father served as a Navy Seabee in Ireland during World War II. He did not speak much about his experiences in the war, but he was so proud of this sugar bowl and creamer he brought home with him for my mother. It is made of the very thinnest china, called belleek. It has been mine since I got married, and I treasure it dearly. I am only surprised, and grateful, that it has traveled across an ocean with my father, and across several states as my own family has moved over the years. 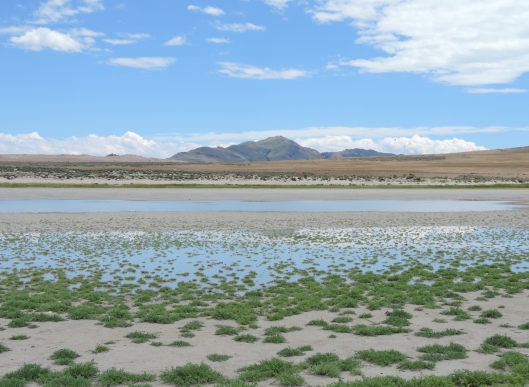 Looking onto Antelope Island from the
Great Salt Lake. 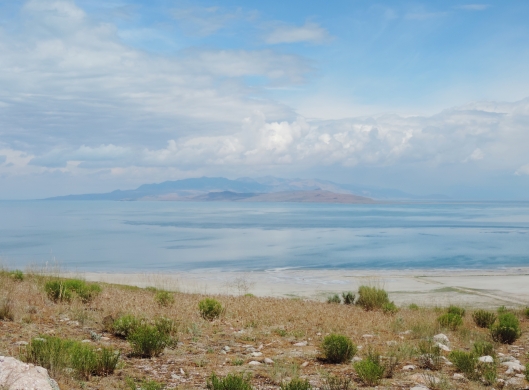 Looking across the Great Salt Lake from Antelope Island.

One of the most beautiful places I have ever been is Antelope Island State Park situated in the Great Salt Lake. Until last summer, I had never heard of it, but on a recent trip to Utah we noticed it on our map and decided to check it out. It is nothing short of spectacular, incredible, magnificent…my pictures can certainly not do it proper justice.

It is reached by a causeway that all by itself offers great views, many reasons to stop along the way, and a great number of shorebirds to see. 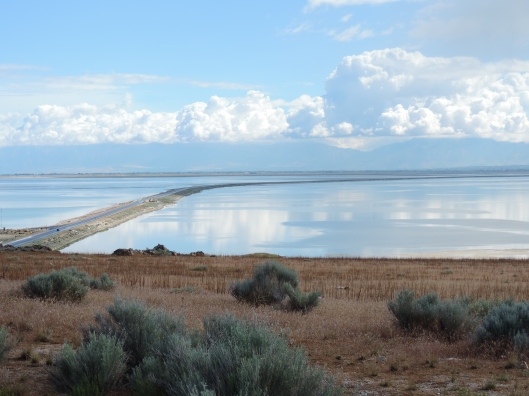 Not so long ago I caught this “swarm” of white pelicans at Riverlands Migratory Bird Sanctuary in West Alton, Missouri. Riverlands sits near the confluence of the Mississippi and Missouri Rivers. 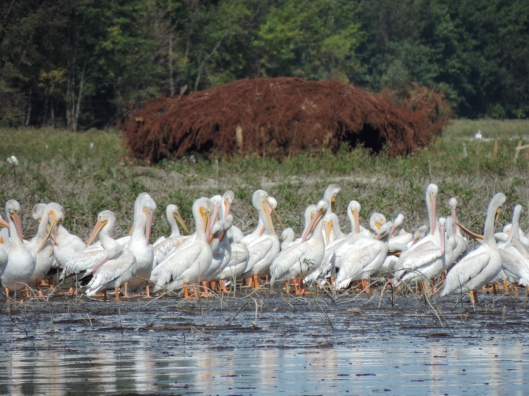 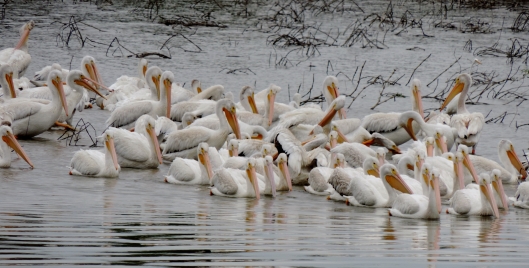 These pelicans were in Ellis Bay at Riverlands.

That one moment when you want to catch the hawk before it flies off…and you capture it just as it is spreading its wings! 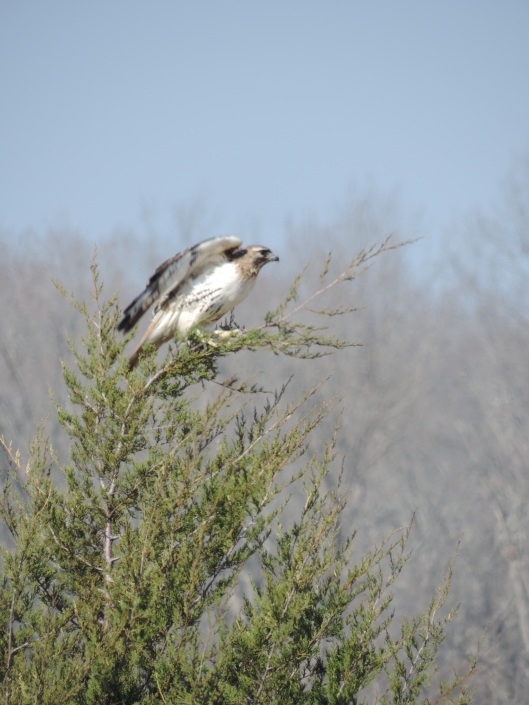 Rolla is a small town in south central Missouri. It is also the county seat of Phelps County. Over the years, the county government has occupied three different buildings. We are fortunate that all three buildings are still standing and still in use by the people of Phelps County. They are all located across the street from one another.

The three buildings have definite differences in architecture based on the eras in which they were constructed.

The first Phelps County Courthouse was the John A. Dillon House, built of hand-hewn logs in 1857. Today it houses the Phelps County Museum 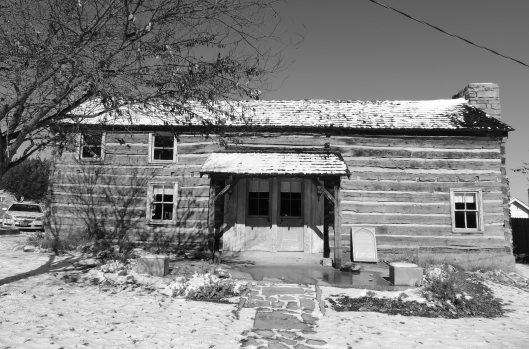 The John A. Dillon House 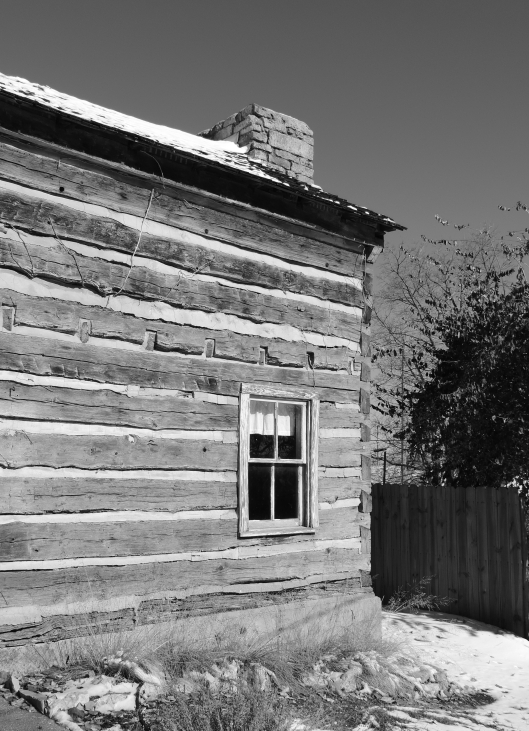 Here you can see a close-up of the construction of the Dillon House. 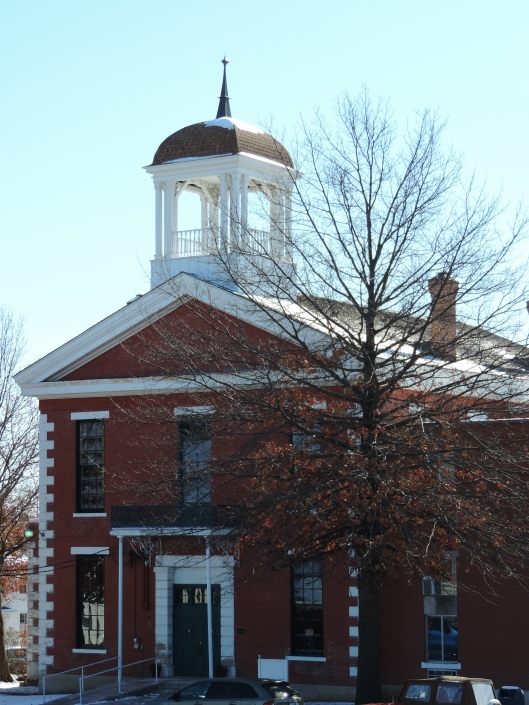 During the years of the Civil War, the Old Courthouse was used as a hospital, and at one time, as a storage building for horse’s hay. 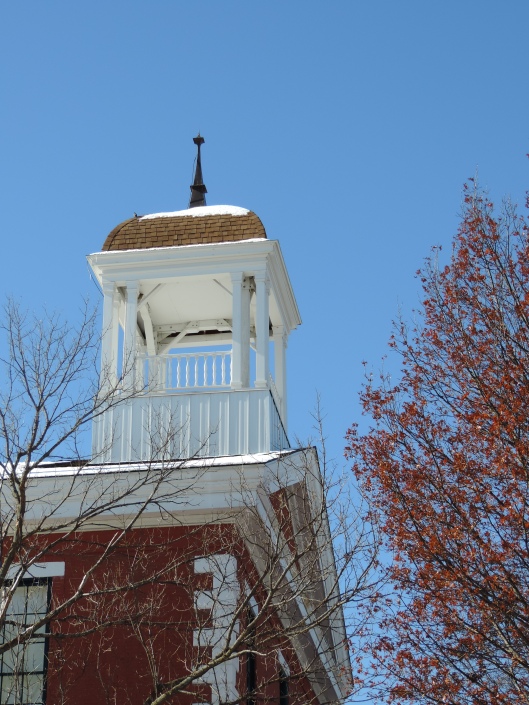 The cupola on the Old Courthouse. 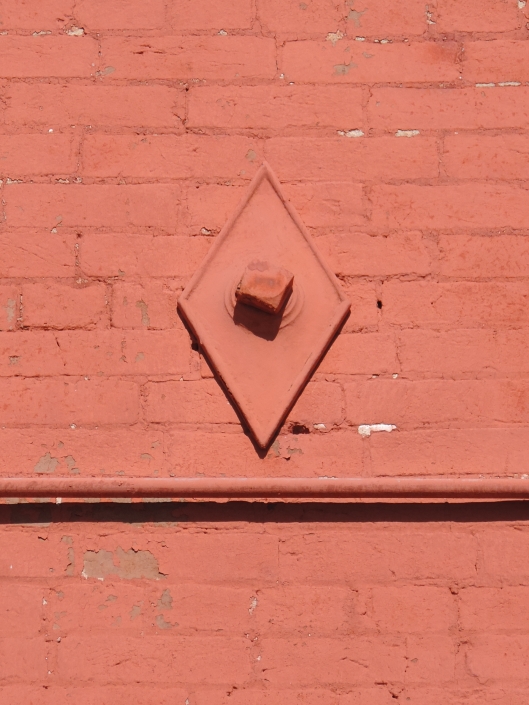 Earthquake rods were built into the sides of the Old Courthouse.

The courthouse in use today was built in 1994 with a distinctly modern architectural style. 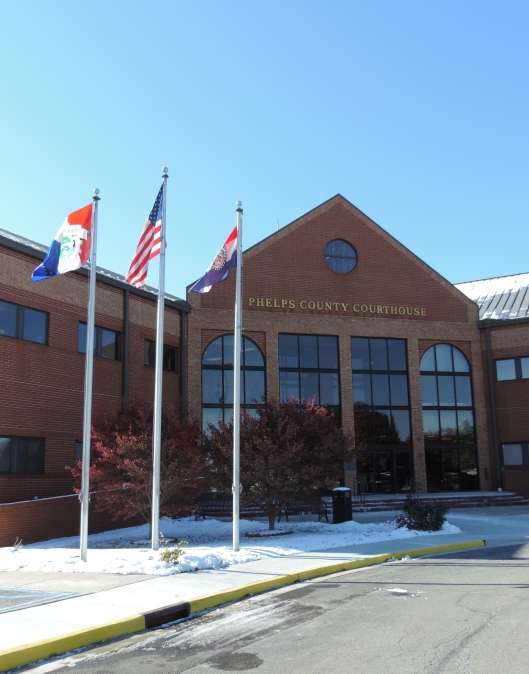 Three eras, three distinctly different courthouse architectural styles, one county seat. I am glad we have chosen to preserve all three of them!

I saw this barn on our drive into St. Louis today, and thought it was perfect for my post today. It is truly a burst of color in this otherwise white and brown landscape.

I did some research to learn why barns are painted red. European settlers brought this tradition to America when they arrived here many years ago. Linseed oil was applied to barns to seal and protect the wood of the barn. These farmers found that if they added ferrous sulphate, commonly known as rust, to the oil, it caused the oil to take on a red color. They also believed that it gave protection against certain fungi and molds, which, if unchecked, allowed the wood to deteriorate sooner. So there you go, a pop of color and a bit of information!